The Path to College 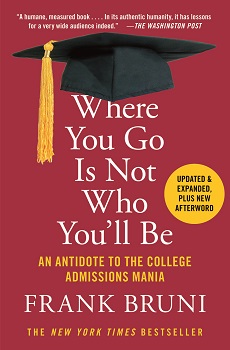 Almost 1000 South Bay parents and students came together on a Saturday afternoon last month to hear Frank Bruni, author of “Where You Go Is Not Who’ll You Will Be,” speak about the college admissions process.  Given that stress levels among students, particularly high school, is a subject of concern among parents and educators on a national level, the large number of attendees wasn’t surprising.

“Inviting Frank Bruni to speak to our community was intended to continue the conversation about stress and college admissions among students, parents and educators”, says MBEF Executive Director Farnaz Golshani Flechner. As a journalist for the New York Times, Bruni has access to a host of experts and resources to truly examine the current state of the process and how it is affecting our younger population. Sharing his own personal history as the son of a mom engrossed in being able to display the bumper stickers of only the most prestigious universities, Bruni knows all too well the challenges that exist for our youth.

Over the last few decades, college admissions has turned into a petrifying, and often devastating, process that causes undue stress among today’s high school students. The plethora of test prep courses, tutors, rankings and strategizing that exists to ensure entry into the college of choice is overwhelming. But Bruni believes that the strange notion that someone’s college degree somehow explains where they end up is a complete fallacy. Through his research, Bruni seeks to prove that the Ivy League schools do not hold exclusive power over all high-level government positions, or even the most prestigious academic awards or grants.

Bruni shuns the notion that a college education is merely a means to an end. A college education, whether from a large state university, small specialized college or an Ivy League, can be an ideal catalyst for every student.  Highly successful people are not products of the Ivy League alone. More often than not, students allow their worth to be determined by which schools say yes and which schools say no.  Rather than taking the time to explore their passions, students look for a well-defined recipe for success. The concern ultimately becomes more in the packaging than the content, as if a life can be plotted and molded. And the first step inevitably requires acceptance into a top tier college. Bruni’s argument that this is simply not the case offers a sense of relief to parents and students alike.

Perhaps the most poignant example Bruni gave the audience of the ‘mania’ that exists today is the concept of ‘doing it all for nothing.’ One of Bruni’s trusted colleagues, a counselor at a San Diego area high school, once shared her key takeaway of today’s college admissions process with the journalist. It is always tragic for her when a student receives a denial letter from the college of his or her choice.  Tragic not because the student wasn’t accepted, but more often than not, because the student’s reaction is that everything that led up to this point was done for nothing. The extra course load, the leadership roles in clubs, the many volunteer hours, the tremendous effort….all done for nothing.

But really, shouldn’t these activities and commitments help to shape our younger generation into well-rounded, introspective contributors to our society? A high school career is not only an on-ramp to college, it’s a journey of discovery. Bruni shares that he feels young men and women are not given the time to simply try things—they learn elaborate dance steps without taking the time to feel the emotion behind the dance. Ultimately, it’s not the path, it’s the drive and ambition that makes the difference. Once we all recognize this—parents, educators, and the students themselves—the high levels of stress involved in shaping college admissions will become more manageable.

If you are interested in further exploring Frank Bruni’s perspective, “Where You Go Is Not Who You Will Be”, is available at all major bookstores, including our local business partner, Pages: a bookstore.